Bar Refaeli is an Israeli model and occasional actress, most known for her modelling work and for her relationship with American actor Leonardo DiCaprio. She was the cover model of the 2009 Sports Illustrated Swimsuit Issue.

Refaeli began her modeling career before the age of 8 months for a baby commercial. By age 15, she was featured in campaigns for the fashion brands Castro and Pilpel, also starring in a commercial for Milki. Refaeli won the title “Model of The Year” in an Israeli beauty contest in 2000. She was also chosen to be the home model of Renuar fashion network and appeared in their summer 2002 and winter 2003 catalogs. 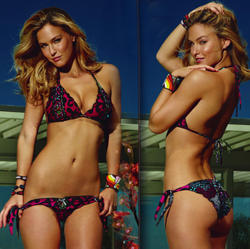